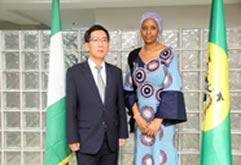 NPA Elevates Managers
The Nigeria Ports Authority (NPA) has announced the elevation of some managers to the rank of Assistant General Manager (AGM), in line with its commitment to operational efficiency, according to a press release signed by one of the promoted officers, Ibrahim Nasiru, of the Corporate and Strategic Communications.
The others are Eze Saint David Chima of the Audit Division; Ibezim Geofery of ICT (who moves to the Monitoring and Compliance Division); Fawole Adeleke Stephen of Accounts; Jagun Khadijat (previously of Medical Services now moved to SERVICOM as Assistant General Manager); Adah Ambrose and BamgbalaTokunbo, both of ICT; Nwaiwu Bartholomew Chijioke of Procurement Division; Maltok Josephine Adar, NPA’s Abuja Laison Office; Engr. Ashade Olarewaju Kolawole of Dockyards; Sobande Theresa Nkemdilim (previously of Personnel, now moved to Administration); and, Dr. Mrs EssienTitilola Ayoola of Medical Services.
According to the press release, all the appointments take effect from the 1st August 2017.

NPA Set To Engage International Consultants to Achieve Deeper Draught
The management of Nigerian Port Authority (NPA) is set to engage international consultants to assist in the optimization of future dredging operations in Nigerian ports in its bid to further reposition the cost of maintaining better navigable channels.
NPA’s managing director, Hadiza Bala Usman, revealed this to reporters during a visit to Daily Trust Headquarters in Abuja.
The role of the existing Joint Venture channel management companies and auditors in the project is yet to be fleshed out.
According to DDH findings, however, the optimization is an audit of the capital and maintenance dredging regime in all the pilotage districts so far in order to interrogate the quantities and performance being claimed by the channel management companies.
Thereafter, the Authority may feel emboldened to marshal the way forward to manage the current rate of dredging activities which NPA’s top management feel is too high and exorbitant.
The terms the current joint venture partners expire in three years when a re-bidding of the positions will fall due.

Protesters remain on Shell’s facility at Belema flow station
Protesters continue their shutdown of Shell’s Belema Flow Station crude oil facility in the Niger Delta with the steady demand that jobs and infrastructure development be prioritized for their host community.
The company disputes the community’s claims and maintained that they had the welfare of their host communities in mind.
Under the close watch of security operatives, around 800 people who are involved in the protest continued to pray in their canopies at the Station where they also cook their meals.
Shell being privy to the movement of the protesters had evacuated their staff and shut the facility; reportedly the IOC is working with the authorities to settle the matter.

Chevron, ExxonMobil, 10 Others Top NEITI Compliance Ranking
A ranking conducted by the Nigeria Extractive Industries Transparency Initiative, NEITI, to select firms that fully complied with the disclosure guidelines in the 2015 audit templates showed that Chevron Nigeria Limited, Mobil Producing Nigeria Unlimited and Consolidated Oil Producing Nigeria Limited led the pack of others which include the Federal Inland Revenue Service, FIRS, and the Nigeria Content Development and Monitoring Board.
The rankings were based on timeliness and completeness of information and data submitted.
The others are Continental Oil & Gas Limited Nigeria, Eroton Exploration & Production Company Limited, Esso Exploration & Production Nigeria Limited, Niger Delta Petroleum Resources, Nigerian Gas Company, Orient Energy, Star Deepwater Petroleum and Waltersmith Petroman which all scored 100%.
The second category which scored between 94% and 98% are Shoreline Natural Resources Limited, Statoil Nigeria Limited, Petrobas Nigeria Limited, Midwestern Oil & Gas Company Limited and ND Western Limited.
According to NEITI’s spokesperson, Ogbonnaya Orji, other companies scored between 72% and 88% while four firms did not make an entry.

No Plan to Increase Petrol Price Now – NNPC
The Nigerian National Petroleum Corporation has countered rumours of plans to increase the pump price of Premium Motor Spirit otherwise known as petrol.
NNPC’s Group General Manager for Public Affairs, Mr. Ndu Ughamadu, dismissed the reports of price hike and assured Nigerians that the oil company will continue to supply the commodity even when other suppliers fail to do so.
He said there was no Federal Government directive for a price increase at the moment.

CBN opens Form A Forex sales for NPA, NIMASA charges
Reprieve is coming the way of petroleum marketers as the Central Bank of Nigeria (CBN) has directed dealers to sell foreign exchange to them for payments to NPA and NIMASA in lieu of port charges.
The circular stated that the new directive will be effected with Form ‘A’ which opens a special market intervention for airline operators, oil marketers, and agricultural businesses to enable them clear a backlog of foreign exchange obligations.
Signed by the Director, Trade and Exchange Department, Wuritka D. Gotring, the CBN circular reiterated its continued effort to improve forex availability the oil marketing companies.

NPA partners with Lagos State Safety Commission on Traffic Safety issues…
The Management of Nigerian Ports Authority (NPA) has interacted with top executives of Lagos State Safety Commission at Marina, Lagos. Both organizations engaged in an interactive session over effective safety of lives and properties on the state roads, the implementation of this, as well as the sustenance of the implementation. The discussions also prioritized intermodal transportation model. Stakeholders agreed on the integration and harmonization of partnership across board for a sustainable millennium development of Lagos and the nation at large. 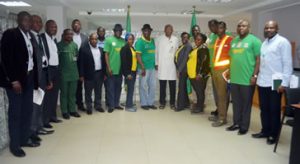 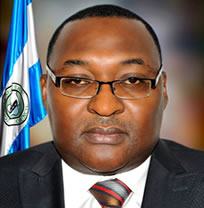 The appointment of Barrister Hassan Bello as the Executive Secretary, Nigerian Shippers Council has been renewed by the Federal Government for four years. This will be the second term tenure of Bello’s stint at the Council. A press release by the Council’s Director of Public Affairs, Mr. Eugene Nweke, stated that the new tenure was effective from “20th June, 2017 to 19th June, 2021 in accordance with relevant sections of the Nigerian Shippers’ Council Act, Cap 133, LFN 2004”. The renewal letter was signed by the Permanent Secretary, Federal Ministry of Transportation, S. Zakari