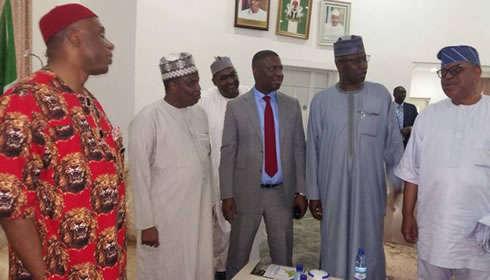 NPA Elevates Managers
The Nigeria Ports Authority (NPA) has announced the elevation of some managers to the rank of Assistant General Manager (AGM), in line with its commitment to operational efficiency, according to a press release signed by one of the promoted officers, Ibrahim Nasiru, of the Corporate and Strategic Communications.
The others are Eze Saint David Chima of the Audit Division; Ibezim Geofery of ICT (who moves to the Monitoring and Compliance Division); Fawole Adeleke Stephen of Accounts; Jagun Khadijat (previously of Medical Services now moved to SERVICOM as Assistant General Manager); Adah Ambrose and BamgbalaTokunbo, both of ICT; Nwaiwu Bartholomew Chijioke of Procurement Division; Maltok Josephine Adar, NPA’s Abuja Laison Office; Engr. Ashade Olarewaju Kolawole of Dockyards; Sobande Theresa Nkemdilim (previously of Personnel, now moved to Administration); and, Dr. Mrs EssienTitilola Ayoola of Medical Services.
According to the press release, all the appointments take effect from the 1st August 2017.

NPA Set To Engage International Consultants to Achieve Deeper Draught
The management of Nigerian Port Authority (NPA) is set to engage international consultants to assist in the optimization of future dredging operations in Nigerian ports in its bid to further reposition the cost of maintaining better navigable channels.
NPA’s managing director, Hadiza Bala Usman, revealed this to reporters during a visit to Daily Trust Headquarters in Abuja.
The role of the existing Joint Venture channel management companies and auditors in the project is yet to be fleshed out.
According to DDH findings, however, the optimization is an audit of the capital and maintenance dredging regime in all the pilotage districts so far in order to interrogate the quantities and performance being claimed by the channel management companies.
Thereafter, the Authority may feel emboldened to marshal the way forward to manage the current rate of dredging activities which NPA’s top management feel is too high and exorbitant.
The terms the current joint venture partners expire in three years when a re-bidding of the positions will fall due.