With the recent revolution in the indigenous dredging industry and the associated mass exodus, recent survey has shown that many firms and investors have entered the industry with little or no requisite knowledge and expertise. This has led to heavy loss in terms of finance, capital, man hours and reputation. To reduce this growing disturbing trend and to prepare and empower dredging professionals and new entrepreneurs who intend to invest into dredging as an investment stream, a discourse of this nature is being written to cater for issues associated with handling and managing dredging projects.

What Is The Term Dredging?
Dredging is defined as the removal of soil from the marine environment and subsequent transportation to another place either for deepening of water or profitability uses of the soil. In other words, it involves repositioning of soil from a marine environment, using specialized equipment, in order to initiate infrastructural and/or ecological improvements. In this definition “repositioning” stands for the process of (1) removal, (2) transport, (3) placement and often (4) treatment of soil; “soil” stands for sediment or silt, as well as for specified soil types like sand, gravel and rock.

Definitions of dredging usually emphasize the excavation and removal aspects, because originally the almost exclusive purpose of dredging was the deepening or widening of silted waterways and harbors in order to improve navigation (“maintenance dredging”) or the creation of new waterways like the Suez and Panama canals (“capital dredging”). In the 1980’s and early 1990’s definitions of dredging started to include the removal of contaminated sediments from marine environments (“remedial dredging”), as this became an important additional function of dredging.

At the end of the 20th and the early 21st century, following a technical revolution in the dredging industry, large land reclamation projects (for instance: the creation of artificial islands) were initiated. Today’s definition of dredging therefore speaks of the “repositioning of soil” and not just of the “excavation of soil”. In this context dredged material is seen as a reusable resource.
The Major Economic Benefits for Dredging

2) Flood control and associated coastal protection due to climate change: The recent flood incident that occurred in Nigeria where many coastal states were submerged is an instance: This was due to absence of large scale dredging activities that would have led to repositioning of silted soil from the channels and creeks as against upsurge from the sea and since there was no basin to accommodate the effect of the upsurge, hence the unexpected situation.

3) For the exponential growth in urbanization and industrial expansion, there is a high demand for new land development hence leading to large land reclamation projects, e.g. waterfront development and the construction of artificial islands for airport etc as seen in Dubai and Lagos (Eco Atlantic).

5) Dredging for beach replenishment and construction of marinas and deep water cruise harbors for the purposes of water related tourism (cruises, yachting and beach vacations).

6) Remediation of contaminated sediments, water ways and habitat restoration leading to the growing need for ‘’ green’’ dredging solutions for sustainable development is also another important benefit

7) Finally, dredging for mining for the recovery of minerals, gems and precious metals etc

Maintenance: It involves maintaining navigable silted waterways which probably become shallower for navigation due to sediments, debris and mud etc. In other words, this involves dredging to increase the depths and widths of previously dredged slots and/or access canals, harbors, ramps, and jetties so as to permit access to a drilling barge or a work over unit or a supply vessel as may be appropriate.

Land Reclamation: This involves hydraulic sand filling in swampy areas adjoining creeks and rivers, estuarine coastlines and built up or urban areas or for the stockpiling of sand. The reclaimed areas will later be used as sites for land drilling locations and access roads or construction sites for residential houses, flow stations, harbor works, gas plants workshops, or offices. 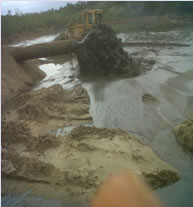 Stock Piling: This involves dredging and piling of sand in a dumpsite for commercial purposes. It may require the deployment of dry plants like bulldozer, excavator, pay loaders and tipping trucks to site etc 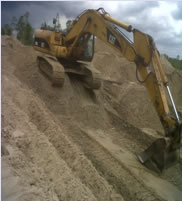 Beach Replenishment: Due to erosion of sand by storms or wave action from the beach, sand is mined offshore and place on a beach to replace the eroded sand: Trailing suction hopper is mostly used for this operation. This is done to enhance the recreational and protective function of the beaches, which can be eroded by human activity or by storms.

Rock Dredging: Blasting is carried out prior to the deployment of a dredger. However, in recent years, dredgers with more powerful cutters have been built in order to excavate harder and harder rock without blasting

Pipe/Cable line River crossing: This involves excavation and creation of trench for pipe/cable line across the sea/river. 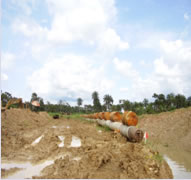 Contaminant remediation: To reclaim and remediate areas affected by chemical spills, storm water surges (with urban runoff), and other soil contaminations. Disposal becomes a proportionally large factor in these operations.

Types of Dredgers
These include plain suction, cutter suction, trailing suction, auger (wheel) suction, bucket ladder,
backhoe/dipper and grab dredger.
Plain Suction: It sucks materials through long pipe in form of vacuum cleaners. It has no cutter at the suction inlet. Jet pumps are commonly used.
Trailing suction: A trailing suction hopper dredger (TSHD) trails its suction pipe when working, and loads the dredge spoil into one or more hoppers in the vessel. When the hoppers are full the TSHD sails to a disposal area and either dumps the material through doors in the hull or pumps the material out of the hoppers. Some dredges also self-offload using drag buckets and conveyors. 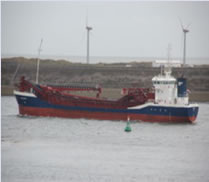 Cutter suction: A cutter-suction dredger’s (CSD) suction tube has a cutter head at the suction inlet, to loosen the earth and transport it to the suction mouth. The cutter can also be used for hard surface materials like gravel or rock. The dredged soil is usually sucked up by a wear resistant centrifugal pump and discharged through a pipe line or to a barge 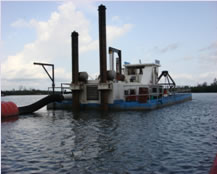 Auger (Wheel) suction: The dredger resembles cutter dredger, but the cutting tool is not like the common cutter for cutter dredgers rather it is a rotating set of screw at right angles to the suction mouth. It is not common in this part of African continent.

Bucket Ladder: A bucket dredger is a dredger equipped with a bucket dredge, which is a device that picks up sediment by mechanical means, often with many circulating buckets attached to a wheel or chain. Some bucket dredgers and grab dredgers are powerful enough to work through coral reefs to make a shipping channel.

A Grab Dredger: A grab dredger picks up seabed material with a clam shell grab, which hangs from either an onboard crane or a crane ship, or is carried by a hydraulic arm, or is mounted like on a dragline. This technique is often used in excavation of bay mud. Most of these dredges are crane barges with spuds. 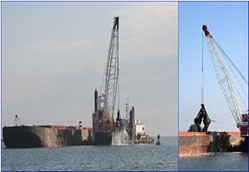 Backhoe/dipper: backhoe/dipper dredge has a backhoe like on some excavators. A crude but usable backhoe dredger can be made by mounting a land-type backhoe excavator on a pontoon.