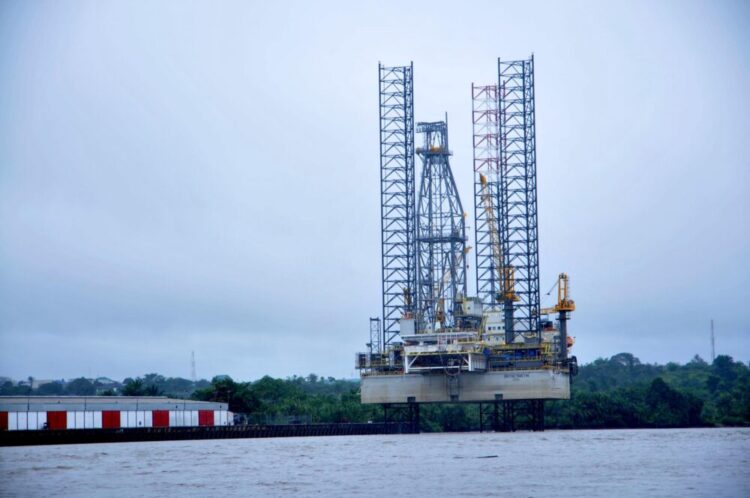 Against the news this week of massive oil theft in the Niger Delta, we revisit the prognosis by the Group Managing Director of the NAL-Comet Group, Pier Luigi Carrodano, on the need to grow the indigenous shipping  sector in an economy that controls 65% of the maritime traffic of West Africa. Both concerns are economic and fundamental to Nigeria’s well-being.

Taking a sample of the news reports, Tony Elumelu, founder of the Tony Elumelu Foundation and a major stakeholder in some oil mining fields, bemoaned that Nigeria is “…losing over 95 per cent of oil production to thieves? Look at the Bonny Terminal that should be receiving over 200,000bpd barrels of crude oil daily, instead it receives less than 3,000 barrels, leading the operator, Shell to declare force majeure”.

The following day the Central Bank Governor, Godwin Emefiele, revealed that recent high levels of oil theft were responsible for the anemic financial position of the federal treasury as foreign exchange reserves are being negatively affected. Last week, the co-founder and former CEO of Seplat Energy Plc, Austin Avuru, urged the federal government to declare a state of emergency in the oil and gas mining sector as up to 95 per cent of oil pumped in the country were not received at the terminal. Also Aiteo Eastern Exploration and Production Company, operators of the Nembe Creek Trunk Line (NCTL) pipeline, threatened to shut down operations due to unchecked vandalism, perennial sabotage and outright theft.

Two reactions from the federal and state governments show that the outcries have resonated. In February, Governor Nyesom Wike of River State pointedly accused the security agencies of complicity in the rampant cases of illegal oil bunkering and operation of illicit modular refineries and ordered local government chairmen in the state to give him a checklist of offenders in their domains. This week, however, the the Nigerian Upstream Petroleum Regulatory Commission (NUPRC) announced the setting up of a team of experts to thoroughly audit the activities of upstream petroleum industry operators in the last two years with aim of ascertaining the actual volume of crude oil stolen by vandals and saboteurs. This week, the Senate set up a 13-man committee to report on the problem.

The equivalent quandary for the maritime sector, according to Carrodano, is the dearth of indigenous carriers since the demise of the Nigerian National Shipping Line (NNSL). In a treatise on admiralty law and the development of maritime trade in West Africa, he reasoned that the natural endowments for a rich maritime nation abound in the country although various socio-political and economic challenges need to be overcome in  order to develop a robust indigenous maritime trade  which would augment her GDP and enhance the potential of available employment opportunities for her citizenry.” Aside from employment prospects, the potential for seafarer training has been blunted by the catastrophic  lack of indigenous carriers whose platforms could have aided the sea-time opportunity for nautical and marine engineering cadets and radio officers, etc. Carrodano’s analysis was contained in a review of the book, Essays in Admiralty: Sustaining Maritime Development in West Africa, Vol. 2 by Jean Chiazor Anishere. Excerpts:

The book, “Essays in Admiralty, Vol. 2” by Jean Chiazor Anishere is a very insightful addition to the literature on maritime law and practice in Nigeria and other jurisdictions connected by international trade. After all, the implications of the globalised world compel a holistic purview of the subject matter from the perspective of international law.  Admiralty law or maritime law has been defined as a body of laws that governs maritime questions and offences, both domestically and internationally, to regulate relationships between entities which operate ships and shipping activities in matters such as “marine commerce, marine navigation, marine salvaging, shipping, sailors, and the transportation of passengers and goods by sea”.1

The author has maintained a consistent focus on West Africa in both volumes of her book on admiralty law.  Without doubt, the region is a fast developing part of the emerging market segment of the global economy.  However, the abundant opportunities in this part of the world are also matched by the many challenges to the administration of admiralty laws.  The author has brought her experience of legal practice to the presentation and analyses of facts in her books to the extent that she has earned an enviable reputation among her peers.

Nevertheless, the focus of the book on the current state of affairs in the maritime sector in Nigeria and West Africa could not have come at a better time.  Nigeria is blessed with a population of over 170 million people, 853 nautical miles of shoreline with the Atlantic Ocean, many  rivers such as the Niger, Benue, Ogun, Gongola, Numan and Imo, and after the re-basing of the economy last year, she became the largest economy in Africa. In other words, the natural endowments for a rich maritime nation abound in the country but various socio-political and economic challenges frustrate the development of a robust indigenous maritime trade, which could have augmented her GDP and even added more potential to the available employment opportunities for her citizenry.

It is well that the author occupied herself in the book with prescriptive analyses and advocacy of certain models that could remedy the situation.  This is because the burden of the law in developing societies such as Nigeria is to deliver the dividends of peace and stability for social living and for business to thrive.  The latter object has been hard to attain in recent times for some aspects of the maritime industry.  This can be explained by reading Chapter 14 of the book titled, “Enhancing Maritime Security Through an Active Legal Framework”.   For example, in the fish trawling sub-sector, we have seen the depletion of whole fleets of ships on account of the depredation of pirates who waylay our seamen, steal their catch, money, fuel and even fishing gear.  In some cases, trawlers have been hijacked and the lives of the seamen on board subjected to horrible experiences that discouraged many Nigerian youths from the lucrative employment aboard fishing trawlers.

Such a state of anomie has wrecked havoc on the industry in such a way that trawler operators have shrunk in number from 35 in 2005 to just nine in 2014.  At the same time, the total national fleet of fishing trawlers has dropped from 250 in 2005 to 124 in 2014. Many of the operators simply sold their ships and devised other methods of operation or switched their energy and resources to other trades. One of our companies, Tarabaroz Fisheries Ltd, suffered many attacks of pirates on her vessels especially since the new millennium.  Yet we know that sea piracy is a deviant behavior, an illegal activity whose perpetrators ought to be caught and punished according to the laws of the land.

However, the paradox is that, for various reasons, the absence of sufficient deterrence or the lack of patrol by the relevant government agencies invariably left our maritime spaces open to be exploited by the dare-devil criminals on the prowl, a situation that is now changing since the inception of the new administration in the country. Only two months ago, the Joint Task Force (JTF) in the Niger Delta, Operation Pulo Shield, arrested twenty-one suspected oil thieves and destroyed illegal oil bunkering sites in multiple raids in the region.  Just last month, six suspected sea pirates were arrested in connection with the killing of four soldiers and one mobile policeman attached to the Joint Military Task Force at Nembe in Bayelsa State. The culprits were handed over to a prosecuting agency. More importantly, the Joint Military Task Force has been constituted to comprise all the appropriate arms essential for law enforcement and prosecution, including the Army, Navy, Air Force, the Nigeria Police, Nigeria Security and Civil Defence Corps, Economic and Financial Crimes Commission.  Thus, we commend the analytical approach of the book to recommend remedies as we can see from the foregoing that the Nigerian state is rising to the emergent challenges of law enforcement in these latter days.

On the other hand, we can also study in this book some of the more positive aspects of the Nigerian maritime trade.  Chapter 2, titled “The Evolution of Nigeria’s Maritime Industry” furnishes such a scenario, especially when we consider that one of the subjects treated in that chapter, “NMA” and “NIMASA”, can be conceived as special-purpose-vehicles established by the federal government in 1987 (and modified in 2007) to facilitate the participation of Nigerians in shipping, seafaring, ocean transportation and general maritime trade.  We must not lose sight of the statistics of Nigeria’s natural endowment which I expressed above, such as large population, access to the Atlantic Ocean, favourable climate and abundant mineral and agricultural resources leading to dominance in the West African region. But the question then, as now, is how we are tapping these resources to create wealth, reduce poverty and want, and improve the general standard of life and wellbeing for the citizenry.

On this score, I must state that we have more work to do, especially to capture the right competitive spirit to claim our share of the carriage of cargoes generated by the nation’s economy and international trade. I must commend the erstwhile spirit that was embedded in the National Maritime Authority (NMA) which resulted in the implementation of the 40-40-20 cargo-sharing formula based on UNCTAD Code of Conduct for Liner Conferences.  This policy which came into force in 1988 and was suspended in 2000 gave fillip to many Nigerian businesses to join the international trade in ship ownership, ship operation, ship chartering, multimodal transport and logistics businesses and even transshipment services.  Again, we must not feel shy to admit the errors that crept into the system via commission agents who dabbled into the sector with brief-case companies and had no genuine interest in developing the aims and objectives of that highly-applauded National Shipping Policy.  Eventually, the policy was suspended and this has unfortunately whittled the number of indigenous operators in Nigeria’s ocean shipping business, much against the dreams of the founding fathers of the nation who established the defunct Nigerian National Shipping Line as a symbol of our quest to retain what should belong to us.  The federal government should not relent to devise new policies and incentives as a way to encourage indigenous operators to continue their legitimate activities in the maritime sector, perhaps by retreating to coastal shipping as a prelude to future venturing into ocean shipping.

In conclusion, I must commend the author, Mrs Anishere, for her persistence and erudite disposition to constantly put pen to paper and keep all of us reminded of the various tasks at hand in developing a virile, robust, balanced and world-class perspective for the development of our maritime sector despite our social challenges as an emerging market. I have focused on just two chapters of the book to demonstrate that the issues canvassed in the book are real-life and not hypothesis.  I would like to enjoin us to buy copies of the book and use it to develop our reading culture and thereby contribute to the conversation on how to nurture the maritime nation of our dreams.