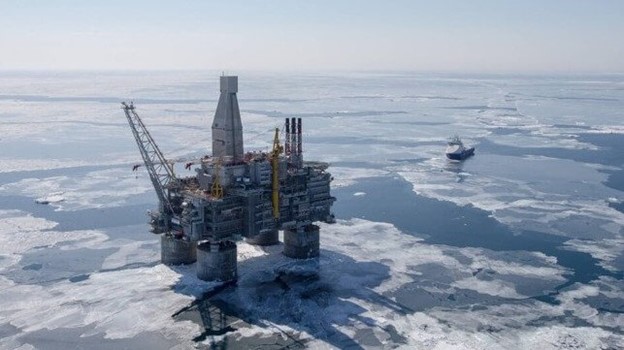 The list of western companies leaving or freezing investments, and specifically in Russia’s critically important oil and gas sector, continues to grow with the repercussions also beginning to reach the tanker market, according to a report in The Maritime Executive.
The move comes as there are reports from Russia that a presidential order has been drafted to impose temporary restrictions on foreign investors seeking to exit from Russian assets, meaning that the companies are putting billions of dollars of assets in jeopardy and warning of write-downs and impairment charges as they announce their moves.
Uncertainty over the scope of the western sanctions is also impacting the tanker markets. The Port of Rotterdam, for example, has permitted Russian tankers and tankers carrying Russian products to dock, while Reuters is reporting that two crude oil tankers due to load Russian energy products at Russian terminals canceled as a result of the invasion of Ukraine. Reports are also quoting the CEO of leading oil tanker company Frontline, Lars Barstad, as saying the threat of sanctions makes oil transport “very complicated.” Barstad reported that his company is unlikely to transport Russian crude oil as a result of the invasion of Ukraine. Denmark’s Torm, one of the largest operator of product tankers, also reports that it has begun declining Russian cargoes while the oil and gas business is not included in the current sanctions.
Public opinion is also putting pressure on many of the largest energy companies to withdraw from the oil and gas industry, stop tankers carrying Russian oil, and cancel investments in projects. France’s TotalEnergies condemned the invasion and said it was “reviewing how to manage its business,” while stopping short of making any moves to withdraw from its Russian projects. Public opinion was mounting against the company along with French Finance Minister Bruno Le Maire saying he planned to discuss TotalEnergies’s presence in Russia with the oil major’s chief executive. By the end of the day Tuesday, Total, which holds a 20 percent stake in Russia’s largest LNG producer reversed itself saying it would no longer provide capital for its Russian projects.
Global energy trader Trafigura issued a statement from Singapore reporting that it “unconditionally condemns the war, the violence in Ukraine and the humanitarian crisis this is causing.” While the company said it does not operate any assets in Russia, it said “we immediately froze our investments in Russia. We are now reviewing the options in respect of our passive shareholding in Vostok Oil,” including a massive Arctic oil project in Russia. The Wall Street Journal noted that “The trading company, which has a longstanding commercial relationship with Russian oil giant Rosneft Oil Co., is one of the biggest traders in Russian oil.”
Oil major ExxonMobil, however, may have the largest assets at stake, reporting that it “is beginning the process to discontinue operations and developing steps to exit the Sakhalin-1 venture.” At stake are assets valued at more than $4 billion and the company said given the current situation, ExxonMobil will not invest in new developments in Russia. ExxonMobil operates the Sakhalin-1 project on behalf of an international consortium of Japanese, Indian and Russian companies. At the beginning of the week, Reuters reported that the company was beginning to remove U.S. employees working in Russia. Saying that the safety of people and the environment was critical, ExxonMobil said, “The process to discontinue operations will need to be carefully managed and closely coordinated with the co-venturers in order to ensure it is executed safely.”
The Sakhalin facilities, which ExxonMobil has operated since production began in 2005, is one of the largest investments in Russia. Reuters reports that the operation pumped up to 300,000 barrels per day of oil and gas. The companies join others in the energy industry including BP, Shell, and Equinor that announced earlier in the week that they were also withdrawing from their Russian projects.