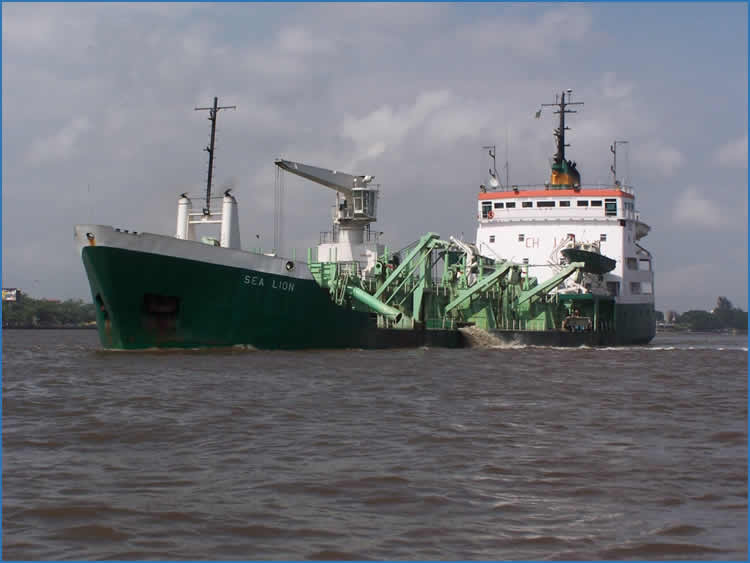 Dredging the access channels of Nigeria’s river ports has been a core mandate of the Nigerian Ports Authority since the inception of maritime trading in the precolonial times. As early as May 1907, the British colonial government in Nigeria placed a steam dredger, The Egerton, at the mouth of the Lagos lagoon to the Atlantic Ocean which deepened the channel to 10½ feet for the entrance of ships into the port of that era, the Customs Quay at the Lagos Marina and the Iddo Wharf abutting the railway terminus. A sand shoal had blocked the entrance so that only vessels drawing less than 9ft were assured of hitch-free passage throughout the year. This constraint hindered merchant marine activities and curtailed the vibrancy which was needed to satisfy the rising profile of international trade for which Lagos was renown. For example, the port’s vibrant trading volume of 383,000 tons (441 ships) in 1894 rose to 1.5m tons (402 ships) in 1946 with such exports as palm oil, palm kernels, groundnut, cocoa, cotton, tin, hides and skins and imports such as cotton piece goods, private cars, petroleum products, fish, corrugated iron sheets and cement, according to Akin Mabogunje. Amongst the ports of West Africa at the time, only Lagos exhibited this robust trading volume, so that dredging its access channels and wharves was deemed an economic priority by the colonial government.

An early decision was taken by the government to embark on the harbor dredging activities. In addition to facilitating ship calls to Lagos, the dredging policy was also aimed at solving the problems of transshipping Lagos-bound cargoes to the Forcados Port due to the obstructing sand shoals. The deepening project was executed hand-in-hand with the construction of the East and West Moles, begun in 1907 and 1910 respectively. As a result of the subsequent improved depth of the bar, the first mail boat entered the port in 1914; by 1920 the depth of the bar was taken to 20ft, which was suitable to most calling ships of the time. At the same time, the construction of the Abonema Wharf at the Port Harcourt port for the handling of coal and general goods which started in 1913 required similar channel dredging works as was done in Lagos to deepen the Bonny River up to the Fairway Buoy.

The Marines Department was in charge of the marine engineering and harbor works needed to construct and maintain all the port facilities until the Ports Act of 1954 established the Nigerian Ports Authority (NPA).  When the NPA began activities in 1955, it took over the various functions which were formerly performed by several departments of the government.  These were cargo handling and operation of quay facilities in all ports nationwide; maintaining, improving and regulating harbours and their approaches; dredging and the provision and maintenance of pilotage, lighting, light houses, buoys, and other aids to navigation. Although the Authority’s original mainstay was the Lagos and Port Harcourt ports, it was ordered by the Federal Government, during the late 1960s, to take over the private jetties and terminals at Warri, Sapele and Calabar, as part of national security measures. Thus, the Authority has since been responsible for the dredging activities to keep them open for commercial shipping activities.

The NPA started acquisition of dredgers in 1964 when the Sea Lion, a trailing hopper suction dredger was built. Other dredgers in the organization’s fleet include River Challawa, Gumel, each with her peculiar characteristics, capability and maneuverability for the varied needs of the Authority’s dredging programmes.  Due to the fact that almost all Nigerian ports were built on rivers, all the river channels belonging to NPA have been dredged at one time or another to facilitate easy passage of vessels. These include Lagos Harbour and Channel, Port Harcourt-Bonny River Channel, Calabar River Channel and Warri-Sapele River Channel.

In the mid-2000s, as part of the national seaport reforms programme, the Authority entered into a joint venture agreement with pre-qualified dredging operators in order to prioritize the provision of international standard dredging services for the new dispensation of port terminal concessions which relieved NPA of its erstwhile cargo handling function.  The Lagos Channel Management (LCM) was tasked with maintaining the Lagos pilotage district; the Bonny Channel Company Ltd (BCC) won the bid for maintaining the Bonny channel while Coastal and Reclamation Engineering Services (CARES) performed professional auditing to ensure compliance with the terms of the dredging contracts. In contrast to the bureaucratic problems which hindered the previous era when NPA undertook the dredging and related services, new benchmarks were introduced by the joint ventures for the observance of best practices to support merchant marine activities and curb the incidences of ships running aground, absence or failure of lighting, buoys and other aids to navigation.  Thus, the NPA maintains the river channels and ports in use to various levels of permissible drafts.

Presently the Lagos pilotage district has been dredged to 13.5m chart datum for channels, berths and turning basins. At the Bonny River Pilotage District, the dredging campaigns are targeted to provide appropriate permissible drafts at the entrance, and sufficient channel depths and width to allow two-ship transit to and fro for the oil and gas carriers serving the Nigerian Liquefied Natural Gas company and other operators in the area. For Bonny access channel, the draft is 13.5m; Federal Lighter Terminal 1 to Brawal Terminal, 7.4m; while the Federal Ocean Terminal channel is 10.6m deep. In 2018, the entrance of the Escravos channel was also deepened to -7metres by Dredging International at the behest of NPA to improve shipping activity in that corridor. The Calabar channel dredging campaigns have been going on since the 1990s and, in 2014, attempts were made to establish a channel management venture.  This process is still in progress. Overall, channel dredging activity has been one of the major pre-occupations of the Authority since the successful seaport reforms of 2001 in order to ensure the growth and vibrancy of international shipping for Nigeria which hosts over 65% of all sea trade in West Africa.  The natural extension of the dredging activities is the present trend towards deep-sea and deep-water ports which are expected to make Nigerian ports attractive in the competition for hub port designation by the major international shipping lines.