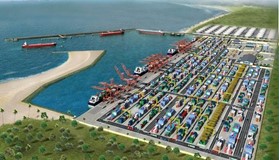 The promoters of the Lekki deep seaport, the Lekki Port LFTZ Enterprise Limited on Thursday disclosed that the project is now almost 80 percent completed, according to Nigerian Tribune.

Disclosing this in a chart uploaded on its website, the firm stated that total works on Nigeria’s first deep seaport is now 79.68 percent completed.

According to the firm, “Dredging and reclamation works is now 89.93 percent completed.

“For landside infrastructure, works done is now 67.82 percent completed, bringing total works carried out on the project as at Thursday, 6th of January 2022 to 79.68 percent completion stage.”

Spread over 90 hectares of land in the heart of the Lagos Free Zone, Lekki Port is situated just 65 km east of Lagos city.

In addition to this existing network, a number of new key road and bridge projects and expansion of existing highways are under development, connecting Lekki Port further into the hinterlands.  The development of Lekki Deep Sea Port was conceptualized on the basis of a significant gap in projected demand and capacity.