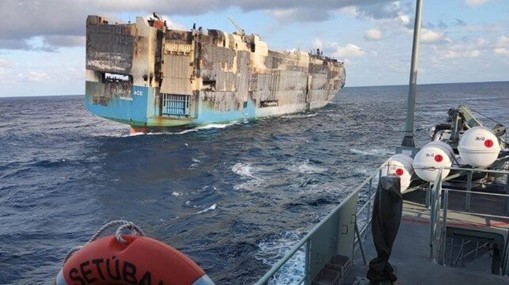 The car carrier Felicity Ace transporting nearly 4,000 cars for the Volkswagen Group sunk this morning, March 1, near the Azores, nearly two weeks after the vessel was devastated by a fire. Salvage crews had been working to tow the vessel after securing a line last Friday, February 25.

Few details were offered, but reports indicate that weather conditions had deteriorated in the area, making the tow more difficult. A spokesperson for the ship’s managers, MOL Ship Management Singapore, told Bloomberg they were surprised by the reports from the salvage team when the vessel went down. As late as last Friday, MOL and Portuguese officials said the stability remained satisfactory. The vessel, however, had developed a list as the tow began.

The Navy is reporting that some debris has been seen in the area and a small oil stain. Dispersant was being sprayed from one of the salvage vessels. Other agencies are also monitoring the situation, with the Portuguese Airforce expected to overfly the area.

One of the salvage vessels has been sent to Ponta Delgada to load additional equipment to fight pollution. At the same time, the Navy’s vessel NRP Setubal, which had left the area to resupply in Porta Delgada, is also being sent back to the scene. MOL reports that salvage vessels remain in the area to monitor the situation.

News of the loss of the vessels comes after Volkswagen Group confirmed to car buyers some of the details of the extent of the damage and models involved. The company is estimating that $400 million worth of cars were aboard, including 1,100 Porsches and 189 Bentleys and unspecified numbers of cars from Audi, Volkswagen, and Lamborghini. Volkswagen confirmed to buyers that its highly sought-after ID.4 electric SUVs were among the cars lost telling buyers that they would be revising production plans to prioritize replacements and that they would be getting the newer 2022 model year vehicles that included improvements over the prior model year cars which were lost in the fire.