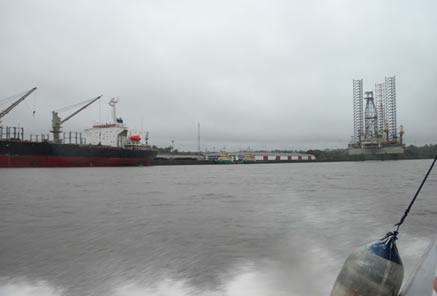 By Edmund Chilaka, Ph.D.
A view of activities at Calabar Port from midstream

The Calabar Port was constructed and commissioned in 1978 as part of measures to address the shortage of port space and cargo handling infrastructure, which caused the so-called “cement armada” problems of 1976. The port is located along Latitude 4055N and Longitude 80 15.3E. It was originally developed during the colonial era by private merchants. During the civil war, the federal government cited national security imperatives and announced the take-over of all port facilities in the country as part of war exigency. Thus, Calabar port was taken over by the Nigerian Ports Authority (NPA), along with Warri, Burutu, Koko and Bonny ports in the late 1960s, at the heat of the war. From the 1970s to the 1990s, it consisted of the Millerio berth, as the main operational area; Jackson Wharf, for lines vessels and vegetable oil tankers; Mobil Jetty, NNPC Jetty, Calcemco Wharf, operated by Calabar Cement Company; and, the McIver and Matilda wharves, which were used as private terminals.

However, after its post-war reconstruction in 1978, Calabar port occupied 38 hectares of land, situated 55 nautical miles inland from the Atlantic Ocean and measured 150 metres wide, with an average depth of about 5 metres chart datum. Various dredging campaigns along its channel have attempted to deepen the draught even up to 9.2 metres though this was not sustained. Its cargo handling capacity has been put at 1.5 million tonnes while the infrastructures were designed to accommodate vessels of 8,000 GRT to 15,000 GRT. Moreover, Calabar port was equipped with the extra facility of an export processing zone (EPZ) located within port grounds, with additional provision of 34 hectares of land for expansion purposes. Following the nationwide seaport reforms in the new millennium, the port’s three concessions were won by Ecomarine International Ltd, Intels Nigeria Ltd and Addax Shoreline Logistics Ltd. Nevertheless, the major concurrent issue with the operations of the Calabar port has been the problem of shallow draught which hampers the entrance of big ships. Thus, year-round navigability of the port’s channel is not assured and, at 96 nautical kilometres from the fairway buoy, it is a considerable dredging challenge to surmount.

This problem has militated against the growth of cargo throughput for the port, which ordinarily, should be an investor’s haven due to its strategic location as a feasible gateway for the south-south, south-east and north-east markets of Nigeria. The draught limitations mean that ships drawing heavier draughts of 7 metres and above, for example, are restricted from calling at Calabar port. In shipping and maritime circles, the solution to this challenge is capital and maintenance dredging campaigns. In recent memory, the Calabar port has been dredged with fairly remarkable regularity. In 1996, the federal government commissioned the China Civil Engineering and Construction Company to execute capital dredging of the port at a whopping cost of N3 billion. In 2007, the Obasanjo administration awarded a $69 million contract to Jan de Nul and Van Oord to embark on yet another capital dredging of the same port. This latter project ended inconclusively in a dispute about quantity of spoil removed and either one or both contractors angrily demobilized from site. A trail of petitions and variation billings followed as the dispute raged between the federal government, represented by the NPA, and the dredging firms.

One may ask why the Calabar channel is seemingly dogged by protracted high-cost capital dredging campaigns instead of the normal downgrade to the cheaper maintenance mode after the first round of capital dredging? The origin of the problem lies with the geographical morphology of the Calabar River itself. According to experts, the catchment arc of the river falls within the heavy rainfall forest region, which records as much as 10 months of rainfall per annum, thereby causing much leaching and erosion on the surrounding land. The run-off water reaches the Calabar River with lots of materials carried into it by tributaries such as Cross River, Great and Little Kwa River and the Mbo River. Moreover, the tidal range along Calabar River is about 3.0 metres, the highest in the country, and the meeting of the heavier salt water from the sea with the fresh water from the Calabar River during flood and ebb tide causes heavy siltation along the channel. Moreover, the section around Tom Shot shoal, the natural barrier through which the access channel was cut, records very shallow depths of -5.0 metres and contributes much siltation. In fact, survey logs from the dredging firms in 2003 and 2007 showed that not less 2.49 million cubic metres of spoil was estimated to be scooped from this section alone. To worsen matters, dredged materials from the Calabar River were dumped in a deep section of the same river, unlike the situation in Lagos and Bonny where spoil disposal is usually at sea. With time, some of the dumped spoil at the Calabar River migrate to the dredged channel to increase the siltation. 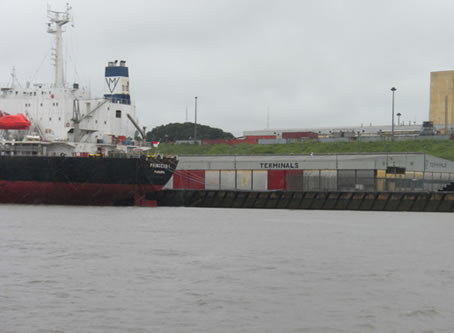 A ship berthed at Calabar Port. In the background, containers can be seen. 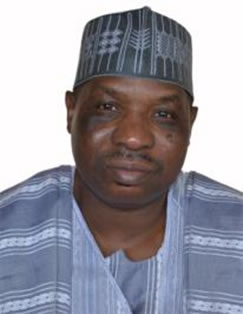 An analysis of the 2014 figures which showed increased trade at all ports would reveal that LPC and TCIP maintained their galloping lead over all other ports in the country. At the same time, Calabar port also increased proportionately in line with its historically lower performance over the years, which has been attributed to the poor draught and lack of aids-to-navigation, as well as other operational-cum-logistic factors, as mentioned above. Nevertheless, on a statistical note, Calabar port increased at a higher rate than LPC and TCIP combined, indicating a possible spike in operator preference for certain aspects of the port’s characteristics. This might mean a stronger attraction to the space endowments that the port boasts of, a clear premium in these days of congestion at the major Lagos gateways. Again, the factor of sustained dredging campaigns by Lagos Channel Management and Bonny Channel Company has been noted as a reason for the high cargo throughput performances of the Lagos and Port Harcourt port systems. Thus, with the recent establishment of the Calabar Channel Management, and the projected upgrade in its channel navigational depth and facilities, more action and preference by shipping lines and logistics operators would likely be noticed in the Calabar port theatre soon.

Nevertheless, it seems that media analysts cannot resist the temptation to compare Calabar Port to the Lagos Port system, a penchant that may be driven by the lure of the operational statistics. This inclination is erroneous because Calabar Port cannot operate or be operated as the Lagos port system due to the different demographic and socio-economic and political histories of the two port cities. Lagos is now approximately a city of twenty-something million people and is bounded by neighbouring states whose populations also exceed Calabar’s less than two million inhabitants. Obviously, population drives the market and this favours Lagos. Lagos ports, on the other hand, are choked up and the city and intercity road networks are jammed with unending vehicular traffic, which hamper goods evacuation to the hinterland. Calabar port, conversely, has excess port space begging to be used. Also, it is strategically located for road haulage connection to the south-south, south-east and north-east markets through the Calabar-Ogoja-Enugu-Abakaliki highway; the East-West Road, now being completed; the Calabar-Uyo-Ikot Ekpene-Aba road linking to the Port Harcourt-Aba-Enugu Expressway and the Ogoja–Katsina-Ala-Yola-Gombe-Mutum Biu road axis to Maiduguri and the northwest zone markets. What is needed is a federal road rehabilitation programme to target massive repair of any failed sections of these well-constructed standard Trunk A roads. Thus, the Calabar Port potentially holds the ace as the existing Nigerian feeder port of the future, to take over-stay cargoes, transshipment and refined petroleum cargoes from the Lagos port system, as well as a prime option for the relocation of badly-sited oil tank farms away from the overstretched Lagos port lands. 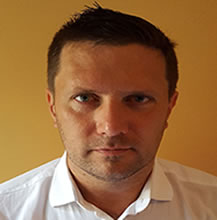 As a demonstration, a medium-sized containership can easily move 300-500 containers overnight from Lagos to Calabar port and vice-versa, if the need arises. This solution can be applied to storage of laden and empty containers, to avoid the constant complaints of over-stacking which hampers goods examination during clearance. If this is developed, it becomes a new niche business for interested private terminal operators who could retain the services of the service ships on long-term charter or outright purchase, if the outline business case is bankable. Such a ship, dedicated mainly for runs between congestion-prone terminals and the sprawling unused spaces of the Calabar port, can maintain fixed or variable sailing schedules in consultation with the stakeholders, on the premise, of course, that the Calabar channel will be adequately dredged, buoyed and lighted by the new special purpose vehicle, Calabar Channel Management.

Again, one may ask how the Cross River State government can tap into the future potential expansion of the Calabar port system? First, it must be noted that the recent news about the state government’s pact with some foreign investors to apply part of a Euro500 million fund in re-developing the port as a deep sea port flies in the face of the reality on the ground, administratively and in terms of commercial viability and profitability. The state cannot construct a new port of its own as no port developer can construct a port on the coastal shelf of Nigeria’s border with the Atlantic Ocean outside the regulations of the NPA Port Act of 1954 as amended. If the intention is to construct an inland port, such a port developer must also carry the National Inland Waterway Authority along. Thus, no state government can unilaterally embark on the construction or reconstruction of any port as the subject is covered in the Exclusive List of the Nigerian Constitution. Second, the economics of deep sea ports require serious collaboration between the port operators, cargo factors and the manufacturing or production companies which utilize the mega spaces usually appropriated by the deep sea port developers. These commercial indices do not obey the dictates of politics or politicians, no matter how well-meaning or the deep pockets involved; market forces would eventually prevail if the project is to avoid becoming a white elephant project.

For example, in the case of Lagos and the south west maritime axis, all the three projected deep-water ports in focus, namely, Lekki, Badagry and Olokonla, do not stand on the same level of projected viability and profitability, despite their close proximity to the huge Lagos market. Experienced operators and technocrats would attest to this. Their varying profitability and viability ratings are defined by such factors as the existing road networks for cargo haulage into the hinterland or even across the land borders; the ready support, sponsorship or promotion by shipping lines or similar cargo factors; access to adequate funding for the construction of competitive facilities or leading-edge infrastructure; and, long term projections for expansion. In the face of these key benchmarks, a deep sea port to be located at Calabar is a non-starter. Such a facility at Oron or the proposed Ibom deep sea port would be a far stronger contender, all said. Thus, the best future for Calabar port is to key into the logistics chain of the NPA gateway network where it stands the chance to be reckoned with by virtue of its expansive space endowments, ancillary federal road networks and improved navigational standards to be put in place by the NPA-CCM joint venture. Many EPZ manufacturers, shipping lines, tank farm operators, cargo logistics firms and even fishing trawlers, would readily pay to take up abode at the newly improved port when the new channel managers undertake the sustained regime of essential capital and maintenance dredging to assure that big ships can enter and berth without the risk of grounding. It would thus, achieve an equivalent viability with the Lagos, Port Harcourt and Warri ports and justify all the dredging dollars that will be appropriated to improve its channel depth and maintain its aids-to-navigation at international standards all year round.

Dr. Chilaka is a consultant on Nigerian dredging and maritime businesses and the organizer of the Nigerian Dredging Summit and Exhibition series.